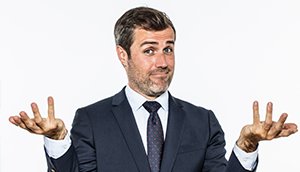 If you’re confused about the letter designations that stand for thousands and millions, you’re not alone. And it’s not your fault. In fact, it’s one of our most frequently asked questions. Here’s why you’re confused and what to do about it.

Western civilization has had two powerful influences — the traditions of the Greeks and the Romans, and there is often conflict. The Greeks would refer to the god of the sea as Poseidon, whereas the Romans would call him Neptune. For the Romans, the god of wine would be Bacchus, and for the Greeks, it would be Dionysus. These differences carry themselves into many parts of our culture, including financial analysis.

As a young banker in the mid-80s, I learned what had been taught for many decades before, that we abbreviate thousands in our analysis with the letter M. If we wanted to denote millions, we would show that as MM. For this, we should credit the Romans. M is the Roman numeral for thousand and MM is meant to convey one thousand-thousand — or million. To take it further; one billion would be shown as $1MMM or one-thousand million.

However, truth be known, if there were an ancient Roman here and we asked him to interpret our use of Roman numerals, we would find that technically MM means two thousand and MMM means three thousand, so there are flaws in this tradition. This reminds me of the old joke about an ancient Roman that goes into a bar, holds up two fingers in a peace sign to the bartender, and says, “Five beers, please.”

Wait a minute, you say. I know I have seen jobs posted that pay $50K, and K is meant to stand in for a thousand. And you would be correct, thanks to the Greeks. K comes from the Greek word kilo which means a thousand. The Greeks would likewise show million as M, short for Mega. So if we stay consistent with the Greek abbreviations, then billion would be shown as a letter G (Giga). Think of your computer expressing bytes of memory as kilobyte, megabyte or gigabyte. However, when it comes to billion, we don’t really see G or MMM as the abbreviation for billion. We are more likely to see a headline that reads the government spent $60B on a new project. They are using B for billion. What can I say? B for billion isn’t Greek or Roman; it is just the first letter of the word billion. So much for consistency.

I saw a headline recently in The Daily Journal of Commerce that read the new downtown post office was to be built for $89M. In the world of accounting and financial analysis, that reads $89 thousand dollars, but we know from context that the headline writer meant $89 million dollars. We sometimes have to code switch and use context to determine what the author is telling us. I referenced the 2021 Associated Press Stylebook used by the majority of journalists to see if the guide would weigh in on how to abbreviate thousand or million. When writing, the guide advises, to use figures only for anything less than a million, but spell out “million,” “billion,” and ‘trillion” for numbers of 1 million or greater, such as 2.4 billion. Furthermore, Associated Press recommends abbreviating millions as “M” and billions as “B” in headlines.

Agents will also commonly see us communicate M as thousands when we quote surety rates or agent commissions. For example, the standard Class B rate starts at $25/M for the first $100M; then $15/M for the next $400M; then $10/M for the next $2MM. Those rates are expressed per thousand and the MM denotes millions. Likewise, we may quote you a single and aggregate contractor line of authority. That line may be expressed, for instance, as $5MM single and $15MM aggregate. If you are an agent or a contractor, you may have seen an email from your surety underwriter that says something like, “The customer should increase their bank line to $1MM.” You now know that years of tradition have trained us to show one million dollars this way.

While the fields of accounting, banking, and finance have adopted the Roman tradition, other fields such as computer programming and the high-tech industry have adopted Greek-influenced abbreviations. As we mix our traditions, it sometimes becomes difficult to know what someone intends to convey expressing thousands or millions in an abbreviation. It is an imperfect world.

At Old Republic Surety we seek to deliver you transparency and clarity in our communications. If you see an abbreviation that is confusing or unclear, please reach out to your local underwriter or branch for clarification, even if you are just asking for a friend.